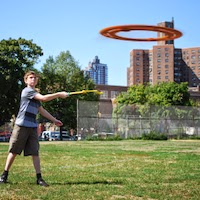 Are your kids ready to ditch the winter jackets, polar-styled boots and itchy scarves for shorts and tees by now? Let's trade in our cabin fever for Spring fever. Well, the countdown to fun has officially begun. OgoSport, the Brooklyn-based toy company known for it's OgoDisk, is revealed two cool, new toys that will officially launch to retailers at New York Toy Fair as part of their 2015 Spring/Summer product line.


Brooklyn, NY is the homebase for OgoSport where Rick Goodwin and Kevin Williams design their award-winning toys to get kids and their families to "Move. Think. Play". OgoSport has developed and launched countless outdoor and construction-oriented toys like their popular OgoDisc which was featured in the Smurfs movie, and their new OgoBILD Animate, an amazing, stop-motion animation kit.

Gaining acclaim from the toy industry with awards such as the Parents Choice Award, TillyWig Awards, Dr. Toy Award, Canadian Toy Testing Council, The National Parenting Center Award and NAPPA Award, it is no wonder why the growing fan-base of OgoSport is making Brooklyn proud .

Batter's Up with the New Batapult 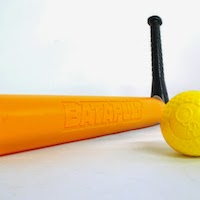 It's a new take on the traditional baseball bat, incorporates a hinge in the middle of the bat which creates a pivoting action during the swing, sending the ball flying up 200 feet. The design of Batapult brings a new experience to the game of baseball as well as creates the same striking force as a standard bat but with half the effort. Children ages 6 and up can use the bat's catapulting action to strike the ball and send it flying up to 200 feet. Batapult is constructed of durable plastic and comes with a dimpled polyethylene foam ball.
Since the hinging action happens above the handle, children don't need to be as strong to swing the bat because some of the strain is alleviated, making it easier. 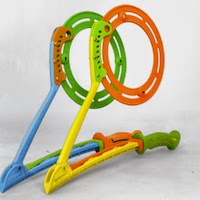 Zip, Zap, Zoom Away with the New AeroZipp Disk

This is a disk launcher that sends flying disks over 175 feet whistling as they glide through the air.

for children ages 6 and up that can launch disks over 175 feet. The disks are made of a flexible, pliable plastic with a whistle chamber built in so they whistle as they glide. The disks can be throw back and forth between players by hand or using the AeroZipp Disk launcher.

Another key feature of the AeroZipp Disk is the "Launch Activator", a trigger that sets the AeroZipp launcher in three different positions for catching, throwing and storing.