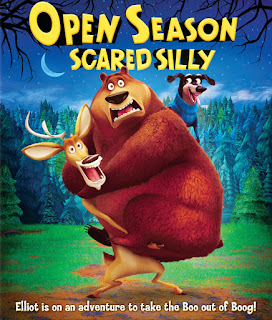 I have never looked at animals quite the same. After falling in love with the hilarious characters of Open Season, every animal is just an animated creature full of personality that we just never get to see as people. Open Season is celebrating its 10th Anniversary and Sony Pictures Animation has released an all-new animated movie, Open Season: Scared Silly, on Blu-ray™ Combo Pack, DVD and Digital HD. This new movie is a fun, mystery adventure that the whole family will enjoy. 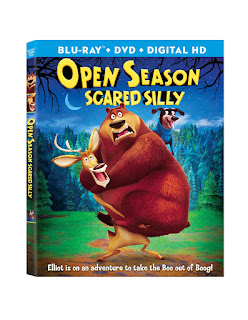 
"Open Season: Scared Silly is a heartwarming tale incorporating good values and laugh-out-loud fun for all ages. The Blu-ray™ and DVD releases will be packed with bonus materials including all-new featurettes, bloopers, a director’s commentary track, and an Inside Sony Pictures Animation profile of director David Feiss.

The first featurette, "OPEN SEASON Super Speedy Re-Cap" will give viewers a look back at the previous three films, and some of the most exciting moments of the franchise.

"Scaredy Pants: The Fears of OPEN SEASON" will tackle what our favorite characters are truly afraid of!

Exclusive to the Blu-ray, "Stepping Into the Spotlight – Mr. Weenie’s Process" gives a glimpse into Mr. Weenie’s trials and tribulations of shooting his most trying scenes for the brand new movie."


"Elliot, Boog, and all your favorite woodland creatures are back in a brand new, comedy adventure, Open Season: Scared Silly. When a case of mistaken identity leads both humans and animals to believe there is a monstrous werewolf on the prowl in Timberline National Forest, former hunter Shaw seizes on the opportunity to re-open open season. With Shaw on the loose and all the animals at risk, it's now up to Boog, Elliot, and Mr. Weenie to face their fears, track down the elusive werewolf, and get open season closed permanently."

* Digital Extras only available with iTunes Extras and Vudu Extras+

** Commentary available on physical discs only

As the owner of this blog, niecyisms and nestlings, I am compensated to provide my opinion on products, services, websites and various other topics. This blog may contain affiliate links. Even though, as the writer/owner of this blog receiving compensation for posts or advertisements, I will always give my honest opinions, findings, beliefs or experiences on those topics or products. This blog abides by word of mouth marketing standards. I believe in the honesty of relationship, opinion, and identity. The views and opinions expressed on this blog are purely my own. Any product claim, statistic, quote or other representation about a product or service should be verified with the manufacturer, provider or party in question.