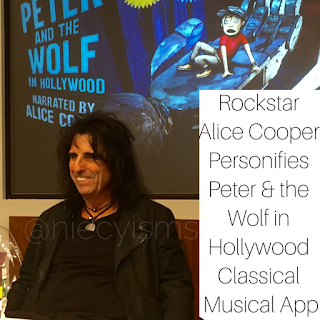 Yes. The Alice Cooper. Exactly the enchanted, soothing voice all children adore listening to as they snuggle in for a calming nightly bedtime story. Confused? Maybe it is a bit of a stretch to imagine, however, my 5-year-old son is now a new Alice Cooper fan. A new fan is not quite of the same caliber as a classic fan, possibly with time and exposure, we can nurture an interest.

Thank you to Blue Suit Mom Media, Giants Are Small and Universal Music Group for the invitation to attend a Meet & Greet with Alice Cooper Launch Event for Peter and the Wolf in Hollywood App.


Rockstar Alice Cooper Personifies
Peter and the Wolf in Hollywood 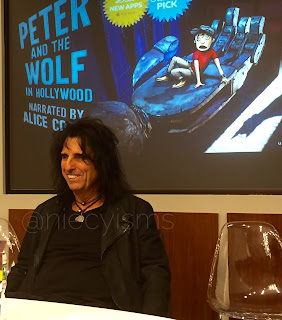 The incredibly charming voice behind the new musical storybook app, Peter and the Wolf in Hollywood, is none other than, rock music legend, Alice Cooper. Unique in technology as an educational, classical music appreciation app and storybook based on Prokofiev’s children’s classic, Peter and the Wolf, which is celebrating its 80th birthday, has been creatively reimagined by Doug Fitch and Edourd Getaz of Giants Are Small and Deutsche Grammophon / Universal Music Group.

Currently available in the iOS App Store as an iPad deluxe app and an iPhone app, there is also an audio album available separately on all major music platforms, Peter and the Wolf in Hollywood is music and artistry at its finest. This musical storybook has become one of our most entertaining bedtime story adventures worthy of encore performances. 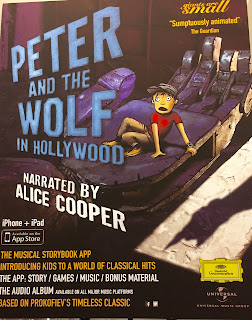 Set in modern-day Los Angeles, Peter and the Wolf in Hollywood begins with the wolf’s escape from the local zoo. To capture the wolf, Peter must build a robot, maneuver his way through a thrilling helicopter chase, and manage some hilarious encounters with several adorably quirky animals. Will he be able to complete the mission?

All the artwork was handmade in Brooklyn, NY, by a dedicated team of artists and craftspeople. Over 18 months of designing and building using cardboard, paint, and magic markers (among other materials!) went into creating our miniature world of Hollywood. Then everything was photographed and animated to create every frame of video in the moviebook. Enjoy the musicality showcasing the stellar performance of an original recording of important, must-listen classical music by one of the world’s most acclaimed youth philharmonic orchestras, the National Youth Orchestra of Germany, conducted by Alexander Shelley. Music arrangements from composers featured include Prokofiev, Wagner, Schumann, Mahler, Puccini, Smetana, Elgar, Mussorgsky, Grieg, Dukas, Satie, and Zemlinsky.

Peter and the Wolf in Hollywood - Deluxe App for iPad
Narrated by Alice Cooper, this interactive musical storybook app allows users to become part of the story which incorporates videos and animation for a multi-dimensional experience.

- Over 48 Minutes of Classical Music

- Bonus section with a behind-the-scenes video of how the Peter and the Wolf app was made.

Peter and the Wolf in Hollywood - Moviebook for iPhone

Narrated by Alice Cooper, this musical storybook app where users can swipe or tap their way through a book-like experience of videos and animation.

Educators and families are encouraged to incorporate the Peter and the Wolf in Hollywood Study Guide in the listening and learning experiences. The 4Cs of 21st Century Learning- Creativity, Critical Thinking, Communication, and Collaboration are researched and promoted by many educational organizations, including the National Education Association, United States Department of Education, the Partnership for 21st Century Learning, and the National Association for Music Educators.

Preparing our students to participate in today’s global community is an educational priority, and the arts can play a key role in challenging students to go beyond the acquisition of knowledge to the production of 21st Century solutions, innovations, products, and relationships. Peter and the Wolf in Hollywood is a perfect medium to involve students in this kind of deep, creative, and collaborative thinking! The accompanying study guide demonstrates activities adaptable for multiple grade levels and teacher needs, and are meant to inspire both musical and cross-curricular explorations at school and at home. Have fun! Imagine! Engage! 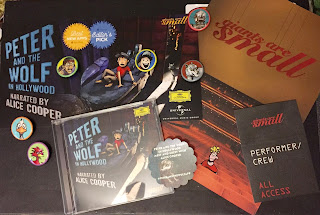 If you create your own educational activities and would like them to be considered for inclusion in the Peter and the Wolf in Hollywood Study Guide, email them to education@giantsaresmall.com.

I was compensated with Peter and the Wolf in Hollywood promotional items for the purpose of facilitating this advertorial. As the owner of this blog, niecyisms and nestlings, I am compensated to provide my opinion on products, services, websites and various other topics. This blog may contain affiliate links. Even though, as the writer/owner of this blog receiving compensation for posts or advertisements, I will always give my honest opinions, findings, beliefs or experiences on those topics or products. This blog abides by word of mouth marketing standards. I believe in the honesty of relationship, opinion, and identity. The views and opinions expressed on this blog are purely my own. Any product claim, statistic, quote or other representation about a product or service should be verified with the manufacturer, provider or party in question.
Alice Cooper app Classical Music Doug Fitch Edouard Getaz Giants are Small music Peter and the Wolf in Hollywood technology