Posted by Denise Murray on October 17, 2019
Holiday celebrations are spectacular. Warm and fuzzy, festive feelings begin to sparkle and shine before my eyes as soon as the first signs of a chill breezes across my face. Family get-togethers, fun festivities, and scrumptious food bring about the nostalgia of treasured traditions with the thrill of new experiences. Witnessing the splendor of Macy’s Herald Square Christmas windows and Santaland are an integral part of holiday celebrations for so many of New York's residents and visitors to The Big Apple. Not very many of us know that Macy’s was the very first department store to feature Christmas window displays beginning back in 1874. Notoriously attracting a crowd, peak visiting hours will delight more than 10,000 people per hour passing by Macy’s window displays. Each holiday season a team of more than 200 of Santa's most dedicated helpers work together to bring the holiday window displays to life. This year Macy's display artists, graphic artists, sculptural artists, animators, carpenters, electricians, and music and sound experts have devoted the past year to the annual presentation. Visitors are invited to "Believe in the Wonder" of this year's Macy's "Santa Girl" Holiday Window display of majestic NYC tradition.

Envisioned by acclaimed designer and Macy’s National Director of Window Presentation, Roya Sullivan, the 2019 Holiday windows featuring spectacular LED lights and 3D objects highlight the adventures of “Santa Girl.” "Through her, we’re charmed by the power of magical thinking and we’re reminded that we all have Santa’s spirit in our hearts,” said Sullivan.


Santa Girl is artistically brought to life by merging modern technological with interactive artistry. Masterfully creating an original, imaginative once-in-a-lifetime display. With much anticipation, on November 21st at 6:00 p.m., this year’s iconic Macy’s Herald Square Holiday Windows will be unveiled at Macy’s 34th Street flagship location. Visitors of all ages from around the world will be able to see, interact, and enjoy all six enchanting windows on Broadway, titled "Believe in the Wonder".

The story begins in bustling New York City on a cool November day. It’s the morning of the Macy’s Thanksgiving Day Parade® and Santa Girl is watching from the inside of her bedroom. As she watches The Parade, she starts to daydream and thinks quietly to herself, “I wish I were Santa.”

With thoughts of St. Nick and the spirit of Christmas running through Santa Girl’s imagination, a window dedicated to the celebration of the holiday lights up Broadway Plaza. Layers of neon and illuminations are charmed into the story. A jolly Santa is intertwining with the large, colorful Christmas tree that is front and center.

Santa Girl is not the only one dreaming of Christmas. Willow the Golden Retriever dreams up a thought bubble while in her fabulous pink dog house, decorated with velvet and neon colored lights. Willow is feeling sleepy from playing with Santa Girl and also imagining a world where she is St. Nick. Willow’s dog house features an official countdown to Christmas.

Santa has finally arrived to Santa Girl’s house and the sleigh-truck is filled with beautifully wrapped gifts waiting to be delivered. Santa’s truck is state-of-the-art with robotic arms and sprinkled LED lights to brighten the road while traveling. Santa Girl can be seen waiting through the window with her red suit to welcome Mr. Claus into her home.

Santa is ready to spread good cheer and gifts throughout the neighborhood. Window revelers are invited to interact with Santa by navigating a vehicle traveling on a road filled with presents. Each time the truck touches a gift, they will burst with luminosities.

In the spirit of the holidays, Santa Girl has inspired all to be like Santa. Window revelers can picture themselves as Santa by smiling and taking a photo in the interactive kaleidoscope window. This serves as a reminder that Santa is in all of our hearts. 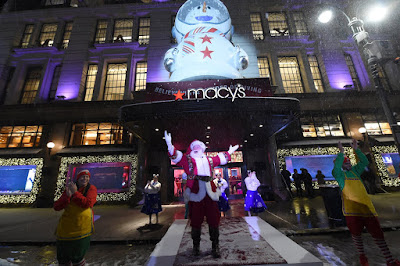 In addition to the six Broadway windows, Macy’s will also display scenes from Christmas classic Yes, Virginia… in the 34th Street windows. The 7th Avenue windows will celebrate the 2019 Holiday Barbie™ adorned with an elegant gown with red and white holiday print and silvery sparkle detail.

Additionally, Macy’s Downtown Brooklyn will unveil its holiday windows on Tuesday, November 26th for the first time since undergoing renovations in 2016. The three Believe in the Wonder windows located on Fulton Street will be centered on the joy of sharing holiday season festivities with those we love. Generations of visitors will find variations of their own holiday traditions mirrored in the windows; each featuring a cast of enchanting characters sharing the spirit of the season in the Big Apple.