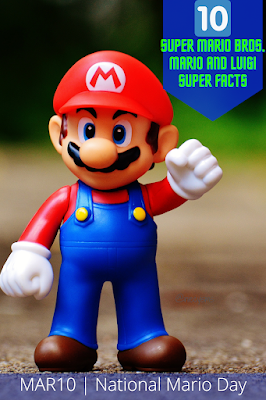 Have you made plans to save this incredibly important date yet? Get ready to celebrate all the things Mario, because MAR10 (that's March 10th) is National Mario Day. For some of us every day is Mario Day, however, MAR10 Day is the annual celebration of everything about Super Mario Bros. When we learned March 10th, also recognized as Mar10, looks just like the name Mario, it all made perfect sense. Here's when we all get to unpack (or purchase) our favorite Mario character costumes and accessories because this day must be celebrated by getting dressed up as Mario, gaming the day away at a Mario-themed party, or simply high-scoring Super Mario Bros. games. Entering Mario's world we get to experience the industry-leader in the continuous side-scrolling gaming experience. Jump in to join Mario and Luigi, along with the whole crew for these 10 Super Mario Bros. super facts for MAR10, National Mario Day!
Thank you to the team from Nintendo for the courtesy of sponsoring this content with gratuitous product for editorial content purposes. This content may contain affiliate links.
10 Super Mario Bros. Mario and Luigi Super Facts for MAR10 | National Mario Day 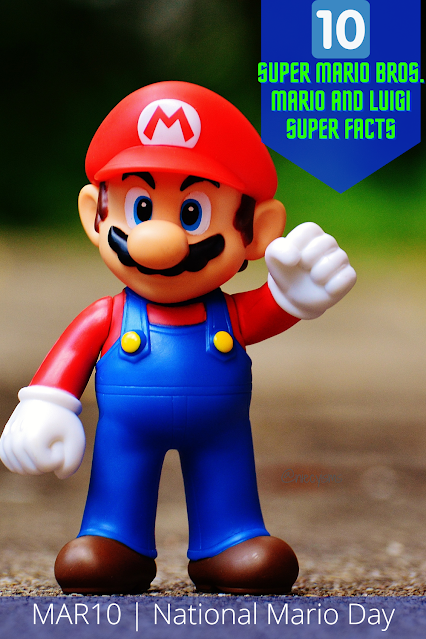 Did you know that it was Super Mario superfans credited with coin-ing the launch of Mario Day? We all know that Nintendo knows their audience, and in 2016 they officially saved the date for the annual March 10th celebration.
1 Mario was created by Shigeru Miyamoto. Nintendo named the game and character after real estate developer, Mario Segale.
2 Super Mario Bros. jumped in to gaming in 1985, however in 1981 Mario was known as “Jumpman” in Donkey Kong. Mario began his road to stardom by jumping over obstacles, climbing up ladders, and jumping over gaps to hop to the top of a construction site to rescue his girlfriend, Pauline.
3 Mario was a carpenter in Donkey Kong before he became a plumber. Along came Mario Bros. in 1983, and brothers Mario and Luigi introducing New York's sewer pipes to the duo of plumbers.
4 Mario first appeared dressed up in red overalls with a blue hat before switching it up to wear blue overalls and red shirt and hat.
5 Hat hair works well for Mario because creating this character's hair was a challenge for gaming developers at the time. Smiling behind his trendy moustache was a creative way for animators to emphasize his nose and minimize his mouth.
6 Record-breaking Mario was the best-selling videogame series of all time (now second to Wii Sports), and has quite a few other noteworthy accomplishments.
7 The voice actor for Mario, Charles Martinet, is the record-holder for most videogame voiceover performances as the same character.
8 Super Mario Bros. movie is the first movie to be based on a video game.
9 Mario is the record-holder for being the longest-running video game character. 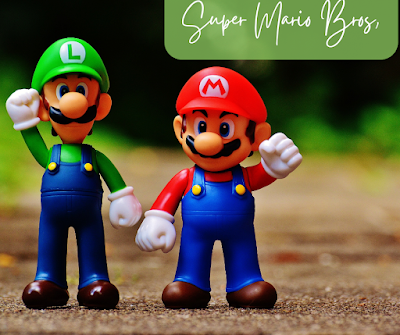 10 Mario and Luigi do not have last names according to Nintendo. Here's one fan theory- The Mario Bros. both Mario and Luigi should therefore be named Mario Mario and Luigi Mario. Hmmm...
Mario is an iconic gaming character jumping into a variety of games for PC, gaming systems, arcades, and mobile games. like Super Mario Run have come to mobile devices. What is your favorite Mario video game?
As the owner of the digital content featured by Creative Learning Center Studios, I am compensated to provide my opinion on products, services, websites, and various other topics. This content may contain affiliate links. Even though, as the writer/owner of this content receiving compensation for posts or advertisements, I will always share my honest opinions, findings, beliefs, or experiences on those topics or products. This website abides by word of mouth marketing standards. I believe in the honesty of relationship, opinion and identity. The views and opinions expressed on this blog are purely my own. Any product claim, statistic, quote or other representation about a product or service should be verified with the manufacturer, provider or party in question.
gaming Mario Nintendo Super Mario Bros.