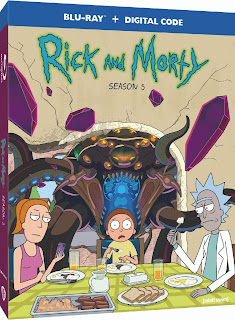 Who are Rick and Morty? There's no secret to my interest in a solid backstory, so here's what you need to know- Rick and Morty is the multi-Emmy® Award-winning comedy series on Adult Swim. This animated comedy series features Rick, a sociopathic, genius scientist masterminding outrageous escapades with his apprehensive grandson on epic, reckless quests across the universe. Rick Sanchez lives with his daughter Beth's family while continually bringing her, his son-in-law Jerry, granddaughter Summer, and grandson Morty along for intergalactic escapades. Rick and Morty has sparked a movement, becoming a multi-platform sensation not just on television, but across digital, gaming, live streaming, retail, and fan experiences. Get ready, there's MORE in Rick and Morty: The Complete Fifth Season.
Thank you to Warner Bros. Home Entertainment and the promotional team for Rick and Morty: The Complete Fifth Seasons for the courtesy of providing complimentary media screening provisions for editorial content purposes. This content may contain affiliate links.
MORE Rick and Morty | The Complete Fifth Season 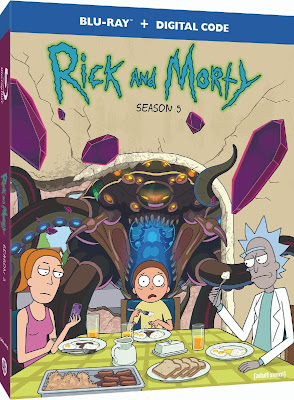 Have you had time to catch up with Rick and Morty Seasons 1-4 yet? What are you waiting for? Join beloved crazy scientist and his grandson returning for their long-awaited, highly anticipated antics in the latest season of Adult Swim’s hit series Rick and Morty: The Complete Fifth Season.
Moving right along, Rick and Morty: The Complete Fifth Season is available to own on Blu-ray, DVD, and digital. Digital is available from various retailers including iTunes, Amazon Video, Google Play, Vudu, PlayStation, Xbox, and others.
Rick and Morty: The Complete Fifth Season Bonus Features-
- "Fighting Gravity": The Making of Season 5 (Exclusive to Set): In this deep dive discussion, co-creator Dan Harmon and the crew reflect on the challenges of completing this season in the middle of a pandemic and the creative process behind the story's biggest revelations.
- “Inside the Episode”: For every episode from Season 5
- B-Story Generator Vol. 1: Co-creator Dan Harmon and writer Rob Schrab reach into their box of random ideas to conjure up hilarious side stories.
- B-Story Generator Vol. 2: Co-creator Dan Harmon and writer Rob Schrab return to brainstorm even more ludicrous side stories.
- Backgrounds: The show's artists give us a jaw-dropping look at the amazingly detailed environments packed into every episode.
- Animation and Compositing: Crafting the show's visuals is a complex process and the crew is here to show us why.
- Coloring Rick and Morty: Get an in-depth look at how the crew uses vibrant color to create fantastic alien worlds.
- Directing 'Mortyplicity': An inside look at the evolution of this ambitious and action-packed episode, from initial storyboards to final product.
- Directing 'Rickmurai Jack': A behind the scenes look at one visualization of one of the most ambitious episodes in the series' history.
- Season 5 Hype: Dan Harmon and the writers give you a taste of what's in store for Rick and Morty's wildest season yet.
10 Rick and Morty: The Complete Fifth Season Episodes
1- Mort Dinner Rick Andre
2- Mortyplicity
3- A Rickconvenient Mort
4- Rickdependence Spray
5- Amortycan Grickfitti
6- Rick & Morty's Thanksploitation Spectacular
7- Gotron Jerrysis Rickvangelion
8- Rickternal Friendshine of the Spotless Mort
9- Forgetting Sarick Mortshall
10- Rickmurai Jack
As the owner of the digital content published by Creative Learning Center Studios, I am compensated to provide my opinion on products, services, websites and various other topics. This content may contain affiliate links. Even though, as the writer/owner of this blog receiving compensation for posts or advertisements, I will always give my honest opinions, findings, beliefs or experiences on those topics or products. This content abides by word of mouth marketing standards. I believe in the honesty of relationship, opinion and identity. The views and opinions expressed on this blog are purely my own. Any product claim, statistic, quote, or other representation about a product or service should be verified with the manufacturer, provider, or party in question.
Adult Swim Rick and Morty Warner Bros. Home Entertainment Warner Bros. Pictures